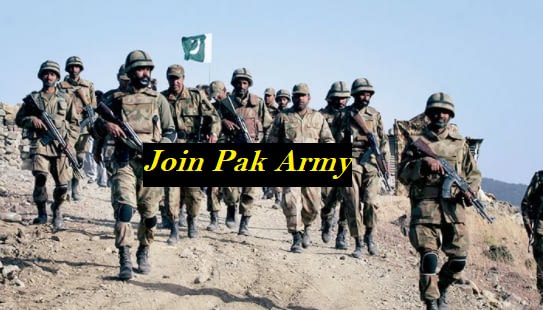 Join Pak Army to defend the motherland and become the part of commitment to serve Pakistan. Today we will discuss Pak Military Jobs, Pakistan Army give equal chance to males and females according to their educational eligibility from Matric to Master. Each year, different Pakistan Army jobs or courses are announced to recruit males and females. However, females are only recruited via commission courses. For non-commission courses, only males can apply.

The education and age qualification to Join Pak Army and apply for Pakistan Army Jobs are listed below.

Eligibility criteria to Join Pak Army 2021 is given as:

In Army Selection & Recruitment Center, different tests are taken in order to check that candidate is mental fit to join Pak Army or not. These tests are known as Pak Army Initial tests.

An intelligence test is the combination of two tests. These two tests are:
Verbal tests consist of number series and similar questions, & non-verbal contain puzzles and picture logic questions.

Academic test is different for every course. To check the syllabus and other details, check the required course article.

These medical test are taken in AS&RC. Unfit candidates will be referred to the nearest CMH (Combined Military Hospital).

These tests are taken in physical test.

Pak Army initial test is the last test taken at the AS&RC. The initial interview forms are given to candidates at the same day of physical test. If you cleared the initial tests, you now qualify the ISSB test.